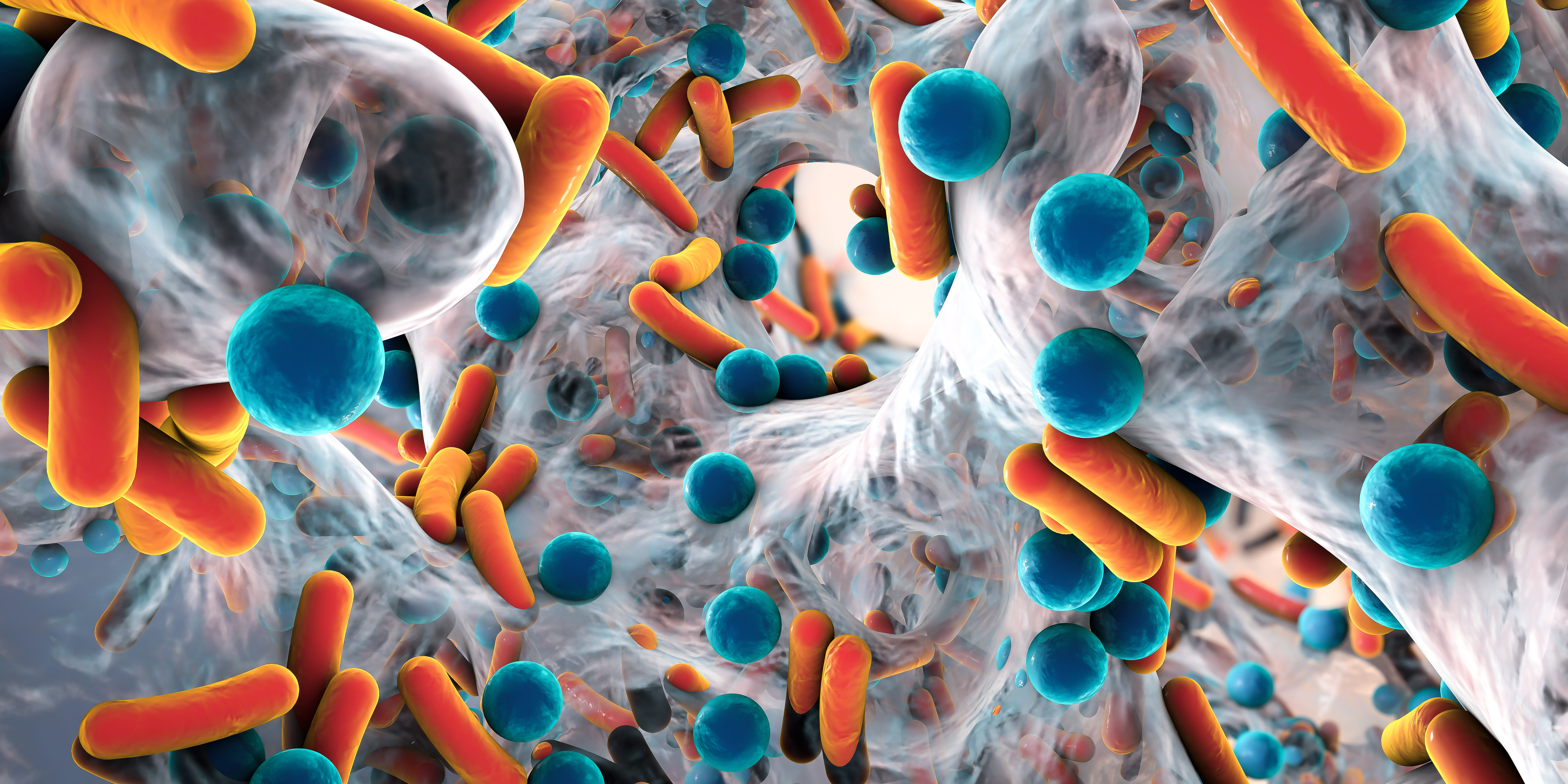 Biofilms the Barriers of Bacteria

Biofilms the Barriers of Bacteria

The human gut is said to be 3-5 pounds of bacteria and in fact humans are actually outnumbered in the body 10 to 1 – bacteria cells to human cells. As you can imagine these organisms residing in our body have great control over our health and overall immune system. These organisms survive and thrive in the body by creating biofilms which allow them to anchor or set up camp in various surfaces both externally and internally in the body. These biofilms can be envisioned as weblike structures where the bacteria build up a strong network of support. It is imperative to systemic immune function that these biofilms be largely composed of commensal or “friendly” microbes rather than pathogenic bacteria, fungus, yeasts or parasites. When the balance of yeast and bacteria is not favorable we call this dysbiosis.

These Biofilms or extensive networks of microbes can be very difficult to alter or change. Most chronic diseases or recurring illnesses are associated with the existence of particular pathogenic microbes living in and thus disrupting biofilms. For example biofilms predominating of staphylococcus aureus are associated with chronic rhinosinusitis. Harmful antibiotics might temporarily relieve symptoms by killing some of the unwanted pathogenic bacteria but are usually not successful in the long run in altering the biofilm.

Because Biofilms have “strength in numbers” they not only have a huge control over the immune system and risk for infection but they can also be resistant to typical anti-fungal or antibacterial treatment alone. Candida Albicans is particularly known for its strong and resistant biofilm making it hard to treat and easy to return even after treatment has been attempted and or completed. Working with an anti-fungal to kill the yeast alone will in most cases suppress symptoms temporarily only to allow the yeast to grow back and continue to thrive. Anti-fungals such as Caprylic Acid (also found naturally in coconut oil), oil of oregano, berberine and uva ursi for example need to be paired with biofilm disruptors in order to ensure access to the base of this web for true eradication.

Biofilm Disruptors are agents that are able to penetrate and destruct or alter these networks. Enzymes are needed for almost all biological reactions in the human body. Proteolytic enzymes are a group of enzymes used to breakdown protein peptides and are used to reduce inflammation in the body by breaking down inflammatory proteins, break down clot forming fibrin in the blood and also break through biofilms disrupting their secure network. Common proteolytic or systemic enzymes are Protease, Papain, Bromelain, Trypsin and Chymotripsin to which can be used to successfully breakdown the biofilm barrier to allow anti-fungal or antimicrobial treatment to be more successful.

Another very important Biofilm disruptor is the antioxidant functioning amino acid N-Acetyl-Cysteine or NAC. This compound is prevalent in therapeutic foods like bone broth and is known to promote expelling of toxins and mucus that is produced during a compromised immune state such as that of a cold or allergies. NAC’s ability to aid in detoxification and encapsulation of toxins in preparation for removal, is likely the mechanism in which it works to prevent biofilm formation essentially breaking them down and separating them up. It also works to produce the most potent antioxidant Glutathione for availability in the body. Glutathione is the most powerful antioxidant in the body and aids in the detoxification process that must occur during and post bacterial or fungal treatment to cleanse unwanted toxins given off by pathogens.

When viewing the role of biofilms in bacterial imbalance, it is important to understand a simple antibiotic or anti-fungal compound whether natural or pharmaceutical may be rendered useless if the biofilm structure is sound. It is essential to have proteolytic enzymes to break down the bacterial foundation in conjunction with N-Acetyl-Cysteine to support encapsulation, excretion, and protection with production of antioxidant support. In this way during the hacking of the bacterial network the pathogen or harmful bacterial or yeast strain is left exposed and vulnerable to the antibacterial or anti-fungal compound allowing complete eradication and ability to reset a healthy gut microbiome!

Here are the formulas we love to target and promote biofilm disruption: