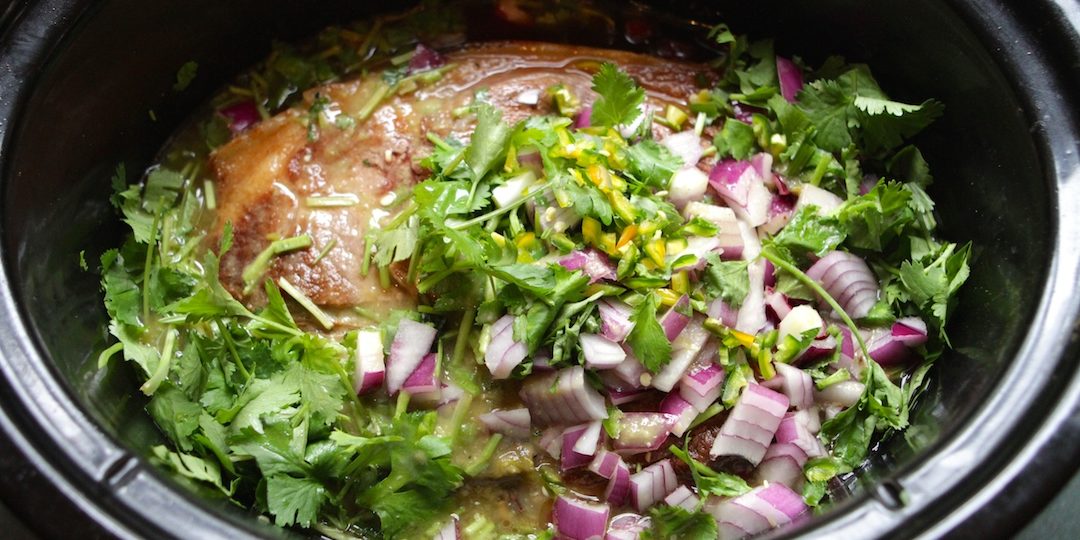 FOOD AS MEDICINE:
This healthy slow cooker carnitas recipe is seared with lard or bacon grease before being added to the slow cooker. Lard has been given a negative health connotation from the lipid hypothesis and misinformation on saturated fat in relationship to cardiovascular disease. If you are following my blog or have worked with me as a client, you know about the role of cholesterol in our bodies and its relative risk to heart disease and stroke. When picking your fat, it is important to choose one that has been minimally processed, is stored properly, and can tolerate your desired cooking temperature.

Lard or bacon fat can be a healthy choice! Lard is 45% monounsaturated, 39% saturated, and 11% polyunsaturated, making it relatively stable and tolerable to moderate-high heat. Saturated fats in a quality form are a necessary aspect of a balanced diet. Saturated fat plays a role in cellular membrane health, brain function, nerve function, and can reduce your risk of heart disease — yes reduce! The addition of saturated fat to the diet reduces the levels of a substance called lipoprotein (a) — pronounced “lipoprotein little a” and abbreviated Lp(a) — that correlates strongly with risk for heart disease. Please note the emphasis on source! Buy real lard that is only a single ingredient in make-up. Pasture-raised animals are less inflammatory than those raised in confined animal feeding operations (CAFOs) that are not able to roam and are fed a diet of GMO corn/soy along with hormones and excessive antibiotics.

DIRECTIONS:
Place roast in a 5-qt. slow cooker. Sprinkle with salt and pepper on all sides. Heat cast iron pan and put a bit of pasture-raised lard or bacon grease at the bottom. Sear all sides of roast for about 3-4 minutes per side. Return roast to slow cooker and spread oil, garlic, salt, and pepper mixture on the roast. Add the onions, cilantro, salsa, broth, tequila, and chilies. Cover and cook on low for 12-18 hours or until meat is tender; you should be able to pull the meat off bone or shred meat simply with a fork.

Remove meat; cool slightly. Shred with two forks and return to the slow cooker; heat through. Spoon about 2/3 cup meat mixture onto each tortilla; serve with toppings of your choice such as fermented cabbage, fresh herbs, baby spinach, or mixed greens, carrot shreds, beans, and/or sautéed bell peppers. Pair with a side of seasoned grilled zucchini, onions, and summer squash.

What did you think about this recipe? Tell us on Facebook! If you’re looking for even more delicious recipes to nourish your body and stay healthy, discover our Naturally Nourished cookbook!