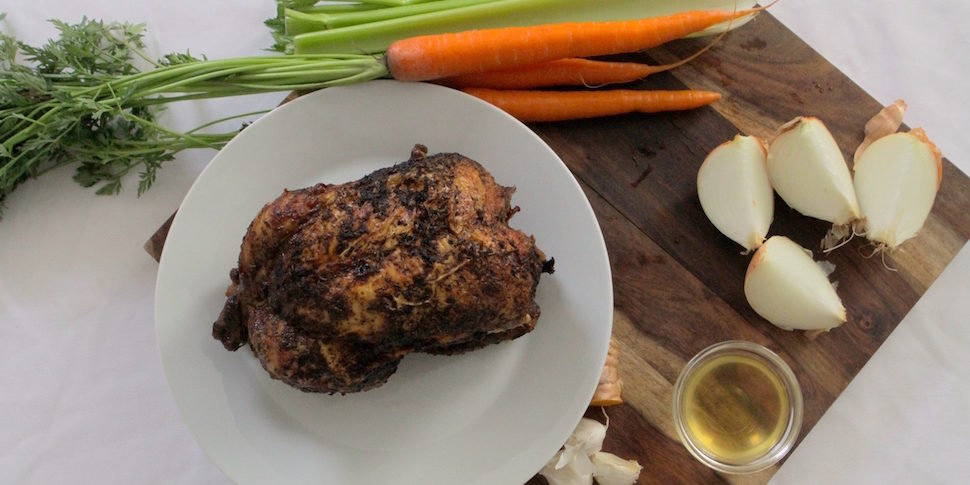 Chicken Soup has long been promoted as a “cure” for the common cold and University of Nebraska researchers validate that claim. They tested 13 brands, they found that all but one (chicken-flavored ramen noodles) blocked the migration of inflammatory white blood cells. Cold symptoms result from an accumulation of these cells in the bronchial tubes, so the ability to block the build up with block symptoms or advancement of illness. The amino acid cysteine, released from chicken during cooking, chemically resembles the bronchitis drug acetylcysteine. Chicken broth has another amino acid glutamine, which aids in rebuilding the gut where most of the immune system is regulated. Use sea salt to create a nice salty broth which keeps mucus thin the same way cough medicines do. Give your soup a boost with garlic, onions, carrots, and celery which can increase immune-boosting power.

1 yellow onion with skin, quartered and then chopped in half

1 red onion with skin, quartered and then chopped in half

Coat inside (cavity) and outside of pasture raised chicken with ghee, sea salt, and black pepper. Roast chicken in oven at 350 F for 1 1/2 Hours until the juices run clear. Option: You may also use a pre-roasted rotisserie chicken. Debone and discard skin, reserve meat for chicken salad or soup and then begin recipe from first step above with the carcass.

Remove skin, discard. Remove and reserve meat for chicken salad or soup (or eat for dinner).

Put the carcass into 4-quart pot or slow cooker and pour in liquid from roasting pan. Cut the onions, carrots and celery into a few large pieces and add to the pot or slow cooker. Cover all bones and veggies with water and put on stove.

Bring the pot to a boil and then reduce heat to a slow simmer.  Note if using slow cooker, run on high for first 4 hours. Add vinegar, turmeric, sea salt, and bay leaves. Let it simmer with lid on until bones are soft and broth is a rich yellow hue, at least 24 hours, but up to 36 hours is great! Do not agitate or stir broth once cooking to allow optimal collagen formation in broth allowing it to gel. If looking to make a more concentrated stock, remove lid for last 4-6 hours to condense liquid.

Cool slightly and strain the stock into a freezer-safe container if not using within 5 days.

Be sure to leave 1-2 inches room for expansion as it freezes if glass; if plastic cool completely in fridge in glass first. Discard bones and vegetables.

You may also want to freeze bone broth in rice cube trays to allow for use in deglazing pans as well as sauces.