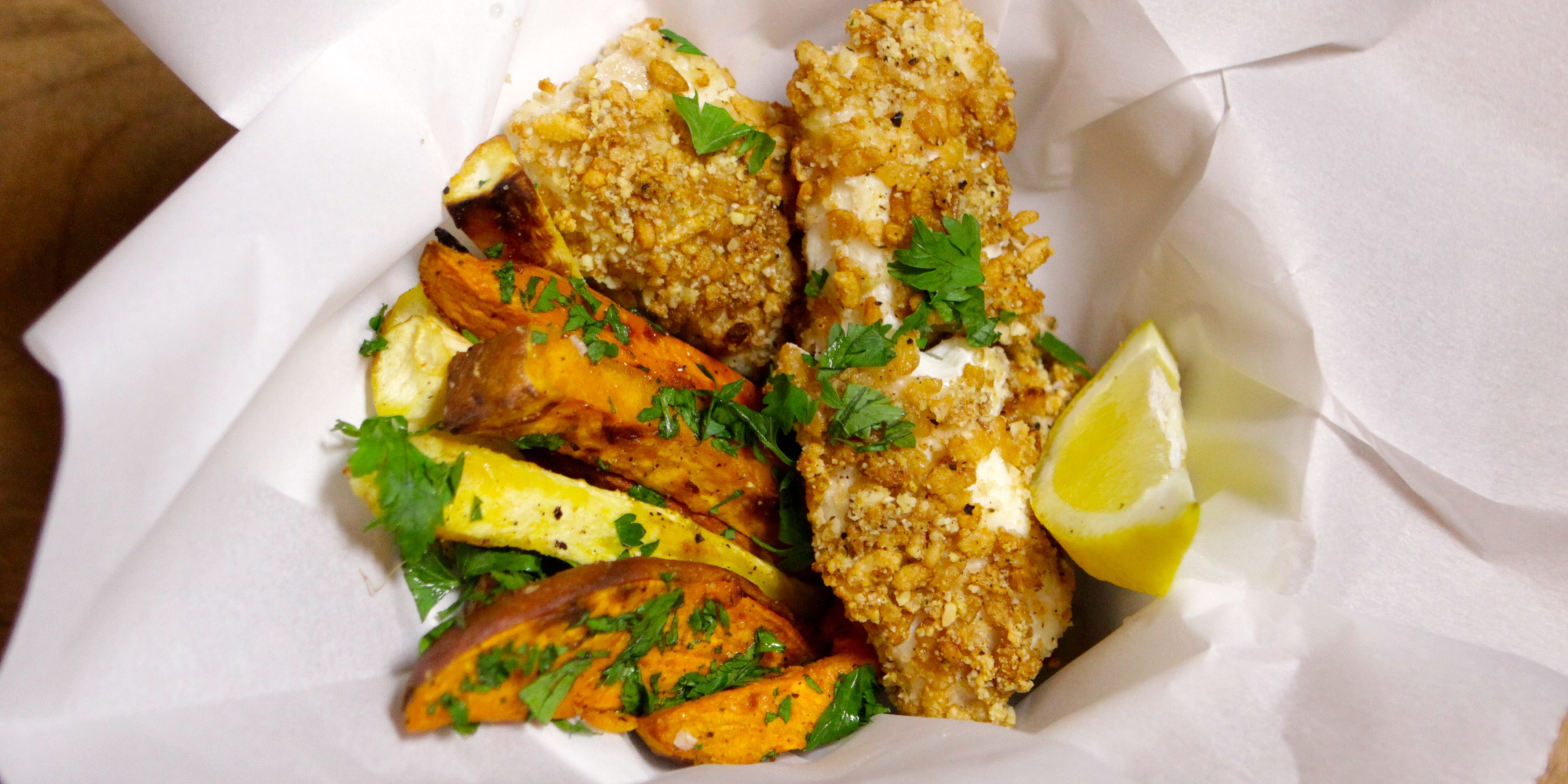 FOOD AS MEDICINE:
Fish and chips are typically beer-battered and deep-fried, filled with nearly a day’s worth of calories and lacking in any significant nutrient value. This version is baked instead of fried and uses sweet potatoes and parsnips for the chips and a gluten-free crust for the fish. The tartar sauce is made with Greek yogurt, providing an extra boost of protein and probiotics. Always choose wild-caught fish, as they contain more anti-inflammatory omega-3 fatty acids as well as more protein due to having to swim against the current. Sweet potatoes are high in beta-carotene and contain anthocyanin compounds, which are anti-inflammatory and aid in brain and blood vessel health. Sweet potatoes can also aid in the release of adiponectin, a hormone in fat cells that favorably works with insulin response to balance blood sugar levels.

DIRECTIONS:
Preheat the oven to 450F. Line two baking sheets with parchment paper. Place the potatoes and parsnips in a bowl and toss with the coconut oil, then sprinkle with the salt, cayenne and black pepper. Spread in an even layer on one of the baking sheets. Bake, turning once with a spatula for 25 to 35 minutes until crisp. In the meantime, place the brown rice cereal in a bowl and crush slightly with your hands. Add in the almond flour, salt and pepper.

Whisk the egg whites with a pinch of salt in a small bowl. Dip the pieces of fish in the egg whites, then dredge in the cereal mixture. Dab or mist with a little coconut oil or ghee. Place on the second baking sheet and cook 10-12 minutes, until cooked through. Make the tartar sauce by mixing together the yogurt through black pepper, then folding in the capers.  Serve each piece of fish with one cup of the fries, a dollop of the tartar sauce and a wedge of lemon.

Food is medicine! The best way to prevent, treat and even reverse illness is through your diet. In the Food-as-Medicine Meal Plans you will receive recipes created with the most potent, therapeutic (and delicious!) foods to support your path to wellness. With these meals you can harness the power of optimal eating to fight cancer, obesity, diabetes, arthritis, metabolic syndrome, heart disease, depression and more!

Learn more recipes like this one in our hands on Cooking Classes! Get introduced to natural foods and products that can decrease inflammation, balance blood sugar levels, and limit food sensitivities. Learn simple preparation techniques that you can apply on a daily basis.  Each class has a food-as-medicine focus from Decreasing Inflammation to Taming Sugar Cravings!